Ahhhh…the holidays bring with them gentle thoughts of joyousness, merriment, and sharing. However, it can also be a time of strife, death, and wanton destruction if Creative Assembly has anything to do with it. They’ve just released a new Lord Pack, Total War: WARHAMMER II – The Shadow & The Blade, and it’s quite a doozy.

The Shadow & The Blade introduces two legendary lords to the tumultuous world of Warhammer II; the Dark Elf, Malus Darkblade, and the Skaven Deathmaster, Snikch. Both of these new lords are playable in both the Eye of the Vortex campaign and its gigantic cousin, Mortal Empires. Luckily, the new update accompanying the Lord Pack has also optimized the game greatly, which has reduced those long loading times in-between turns. 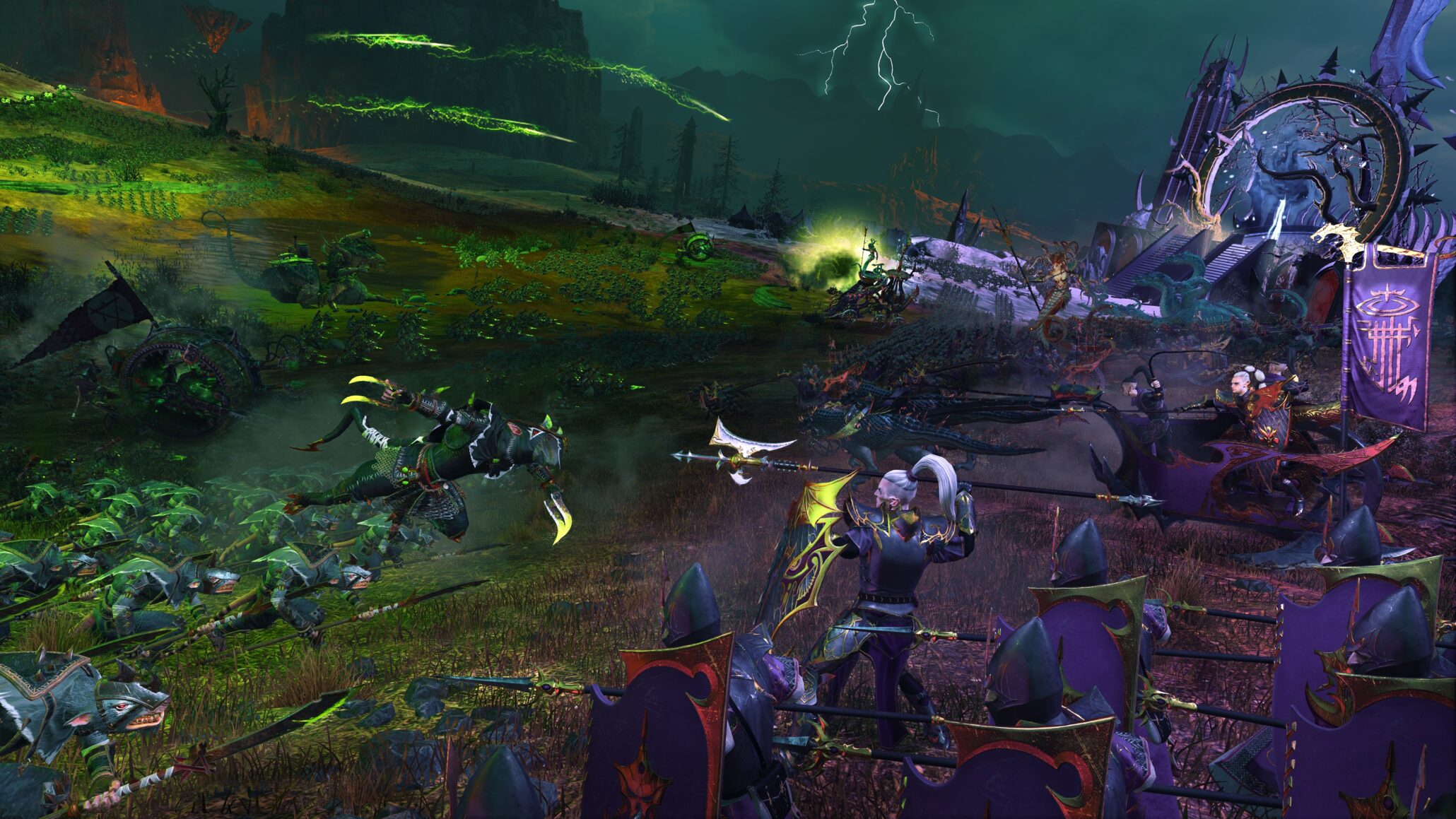 Malus Darkblade is the new Dark Elf on the block, who just so happens to be possessed by Daemon Drinker of Worlds, Tz’arkan. Both Malus and Tz’arkan are locked in a constant struggle for control of Malus’ host body and there are some interesting game mechanics that reflect this unfortunate situation.

With each campaign turn, Tz’arkan’s power grows stronger, which makes Malus an even more deadly adversary during combat. However, as the demon’s influence grows, any generals under Malus will grow increasingly suspicious of the Dark Elf and their morale will begin to ebb. The only thing that will be able to keep the demon in check is an elixir that is supplied to Malus by Malekith, but at an ever-increasing price. The only way that Malekith will turn the recipe over to Malus is if the latter helps the former corrupt the Vortex. 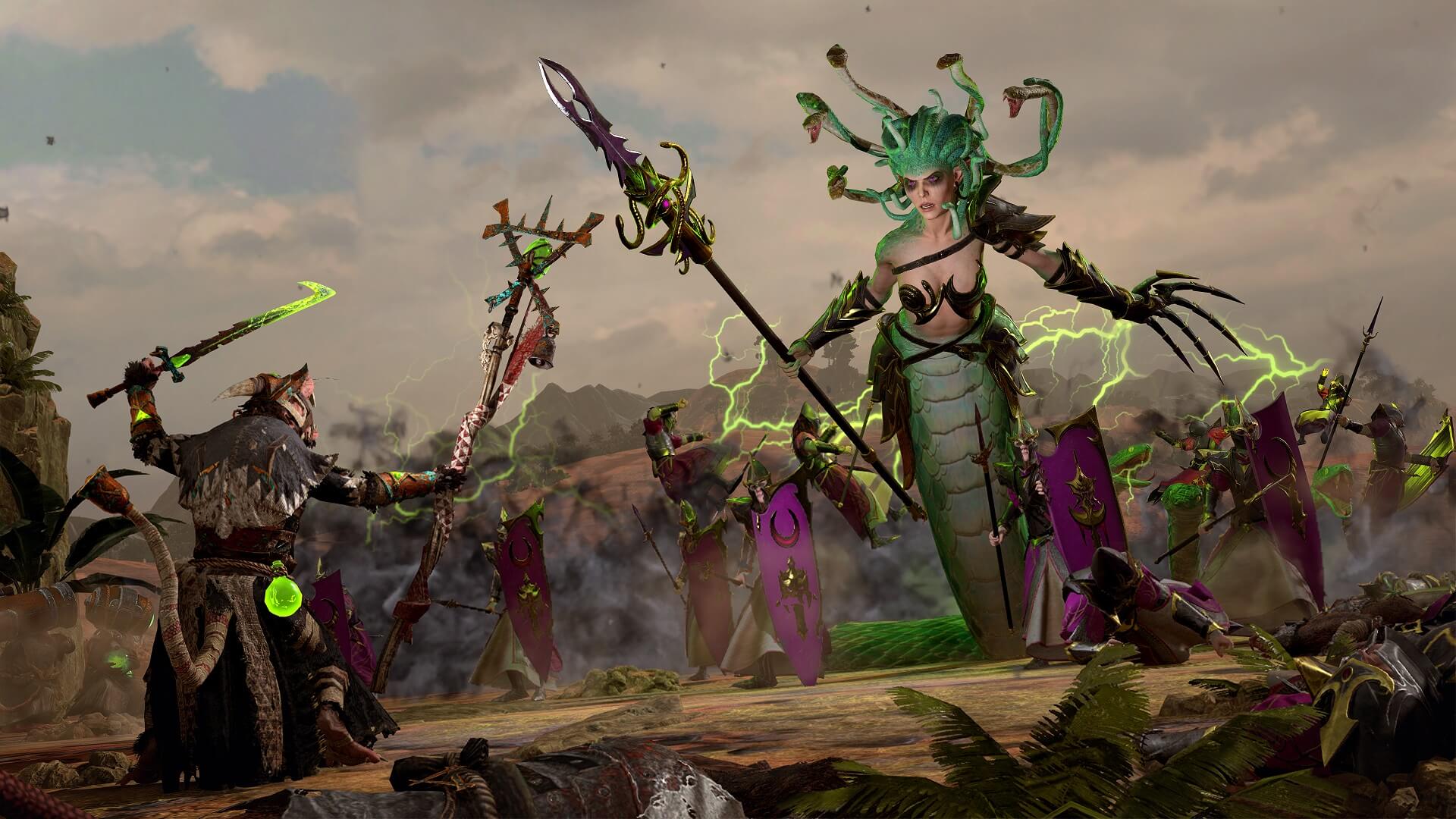 Once Tz’arkan reaches a certain level of possession, he can transform Malus into his demonic form. This transformation is pretty epic-looking and you’ll see Malus’ body become embedded with purple power lines. This isn’t only cosmetic; Malus’ possessed form gets some pretty hefty buffs that can cause him to blast lines of enemies backwards and send them flying through the air.

Meanwhile, on the Skaven side, we have the new addition of Deathmaster Snikch and Clan Eshin. Being the deadliest Skaven assassin, Snikch is sent on a mission for the Council of Thirteen to hunt down Tz’arkan and capture his powerful essence, so that they may control it.

Clan Eshin may perform what are called “Shadowy Dealings,” which function as various acts of espionage. These include theft, assassination, sabotage, inciting rebellions, spying, and even leveling entire cities. However, in order to balance these abilities out, they are dependent on a unique resource called “Schemes,” which gets a certain amount of points every five turns.

Unit-wise, The Shadow & The Blade offers the usual assortment of unique troops that accompany each legendary lord’s faction with Warhammer II’s Lord Packs. The Skaven get some poison and stealth-based units such as Eshin Triads, Warp-Grinder Weapon Teams, and Poisoned-Wind Mortars, while the Dark Elves see the addition of Bloodwrack Medusa, as well as High Beastmaster and Master Heroes, who are specialized in taking down large units.

Creative Assembly has been on quite a roll with their Warhammer II DLC, introducing some of the legendary lords and factions that fans of the series have been asking for. Total War: WARHAMMER II – The Shadow & The Blade is no exception and is an excellent, feature-packed Lord Pack that is sure to please many strategy gamers out there.

Total War: WARHAMMER II – The Shadow & The Blade has some pretty good looking graphics that make its strategy gameplay truly shine. However, you want to have a pretty beefy gaming PC or gaming laptop in order to play it at a decent framerate. So, you may just want to invest in a decent gaming rig: