Asymmetrical multiplayer games are hard to pull off, at least that’s the way it seems. Having a lone killer go up against multiple weaker enemies is a cool concept, but many folks don’t know how to mix the right ingredients in order to achieve that special thing called balance.  Many game developers have attempted to do just that but only Behavior Digital seems to have found that elusive secret formula for success with their asymmetrical horror game, Dead by Daylight.

But many people out there aren’t aware of the fact that Behavior actually attempted to jumpstart another asymmetric franchise not too long ago with a little known game called Deathgarden. The short of it is that Deathgarden didn’t jive well with gamers and as a result, it sort of just faded away.

Instead of giving up on it, Behavior spent quite a while rebuilding and rebranding the game and now we have the Early Access release of their new product, Deathgarden: Blood Harvest. But does it have enough going on under the hood to differentiate it from its massively successful older cousin, Dead by Daylight? Let’s find out.

Deathgarden: Blood Harvest takes place in a dystopian future where all of the world’s societies have collapsed. Well, almost all of them. You see, there are still pockets of splendor known as the Enclaves. Outside of the Enclaves, ordinary folks live their lives in squalor and usually end up not living that long, due to diseases and general hardship.

However, there is a way to gain access into the Enclaves. These rights of passage are ceremonial events where contestants called Scavengers must scour enclosed arenas and harvest blood from the bodies of fallen contestants that came before them. Then, they must transfer the blood into special spires that transport it elsewhere. If the Scavengers are successful in transporting enough blood, a gate will open which allows them to jump into it and supposedly gain their freedom (and access to the Enclaves).

There’s only one problem; there’s also a lone killing machine known as a Hunter that is deposited into every match. Each Hunter (there are three so far with a Terminator skin available on the cheap) packs a powerful arsenal of gadgets and gizmos that can ruin any Scavenger’s day. They also possess a deadly primary weapon and a secondary for backup.

Both Scavengers and Hunters can access special, color-coded crates that litter each of the game’s five maps, which can replenish such things as ammo and health. Hunters can also activate certain containers that house drones which fire up into the air and act as scouting devices. If a Scavenger enters into a drone’s cone of detection, the Hunter will be able to see his or her outline, making tracking them down much easier.

Progression is pretty straight forward. The more successful you are during a match, the more experience and hence, resources you’ll gain. You can use these resources, in turn, to build up your chosen character’s perks, weapons, and the like.

As this is an asymmetrical game, each match contains a solo Hunter who has to track down and kill five Scavengers. While the Scavengers are fast and are able to leap, jump, and parkour around the map, each Hunter can activate an adrenaline-like boost which allows them to move at turbo speed for a short duration. As a matter of fact, as a game, Deathgarden: Blood Harvest is a fast-twitch shooter’s paradise.

The general movement speed of all of the characters is quite fast and only Hunters with fast-twitch shooter skills can be successful in taking down all five Scavengers during an eight minute match. In other words, if you’re used to playing tactically paced, stealth based games such as Escape from Tarkov or Hunt: Showdown, you’ll definitely have to adjust to this game’s hyper sense of speed.

Having five Scavengers also means there are many opportunities to utilize teamwork during a match, but I’m not sure if the crowd that this game seems to be attracting will ever do that. When Scavengers get downed by Hunters, fellow Scavengers have the ability to do such things as shoot healing or stealth arrows at them, or otherwise distract the Hunters long enough for them to crawl to a healing crate.

During my play time I only saw that sort of teamwork implemented maybe two or three times. Like Dead by Daylight, most folks seem to be out for themselves and only for themselves. Hopefully, that will change in the future.

There are also too many female characters for my personal tastes (I prefer playing my gender since that’s obviously more immersive), but maybe they’ll add in more male characters later on in order to balance things out.

Deathgarden: Blood Harvest can be a blast to play when everything comes together. The sheer sense of adrenaline pumping through your body when you outwit a Hunter as a Scavenger, or kill the last Scavenger trying to escape as the Hunter, can really get your temples throbbing (well, at least mine do). We’ll see how Behavior handles their newly revived game as additional content gets added to the game in future updates and DLC.

Deathgarden: Blood Harvest features some pretty nice looking graphics that make its asymmetrical shooter gameplay truly shine. However, you want to have a pretty beefy gaming PC or gaming laptop in order to play it at a decent framerate. So, you may just want to invest in a decent gaming rig: 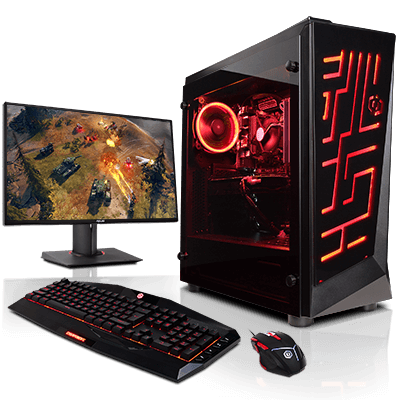