The Righteous and The Fallen Update 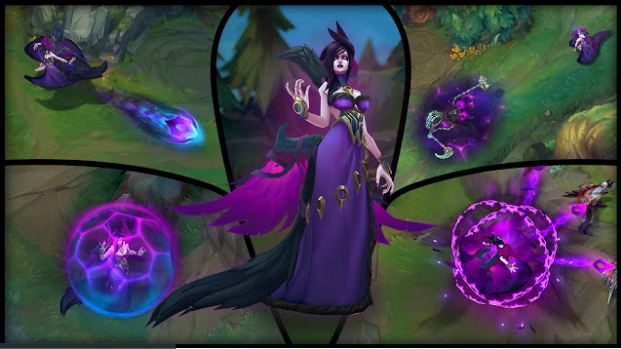 Yesterday, we covered The Righteous Kayle, so today, we’re shifting our spotlight to her younger twin, The Fallen Morgana. Unlike her sister, Morgana has always been conflicted between her celestial and mortal natures, but in the end, she chose to bind her wings to embrace humanity. Still, she punishes those that are dishonest and corrupt. But unlike her sister, Morgana doesn’t believe in laws and traditions, considering them unjust. Although considered a rebel by her sister, she continues to fight for truth from the shadows of Demacia.

Soul Siphon allows Morgana to heal her for 20% of the damage she deals with Champions, Large Minions, and Monsters.

Upon activation, Morgana hurls a blast of Starfire that roots the first enemy hit and deals magic damage.

Tormented Shadow causes Morgana to ignite an area for five seconds, dealing magic damage every second an enemy is inside the area. The damage can increase up to 170% depending on the target’s missing health.

Tormented Shadow’s cooldown is also reduced by 5% every time Morgana is healed by Soul Siphon.

Morgana shields an allied Champion for five seconds. Her shield can absorb up to 350 magic damage and prevents disables until it breaks.

Soul Shackles is Morgana’s ultimate skill which upon activation, allows her to chain herself to nearby enemy Champions which deals up to 70% AP magic damage and slows them by 20%. After three seconds, enemies that are unable to break her chains will take an additional 70% magic damage and are also stunned by 1.5 seconds.

Aside from that, while casting Soul Shackles, Morgana also grains Movement Speed towards the enemies she chains.